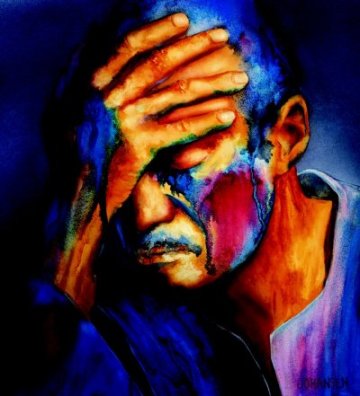 This is a guest post by Kevin Light that really moved me.

I followed him as he walked away from the crowd to the bottom of the garden. He stood there with his face in his hands, sobbing. I put my arms around his shoulders and I held on through the waves of grief that wracked his body.

“There’s only so much superficial crap you can take,” he said.

“Why do they talk like that? They’re adults, with degrees and successful careers. They drive cars. They buy houses. Why, then, must they talk such meaningless junk? Especially at a time like this.”

As we stood in silence, his question hung between us.

Eventually I replied, “They may have degrees and successful careers, Joe. They may own cars and buy houses. They may look and act adult. But perhaps they talk in this meaningless, superficial way, especially at a time like this, because they are not as skilled at being human as they are at those other things.”

Joe’s very small child had died in his arms just a few days before as he desperately tried to resuscitate her.

Now family and friends had gathered for the funeral. Well-meaning people had come in love to bring comfort and consolation. Some brought flowers, others brought food, most brought cards. It was brave of them to come because it was a very tough place to be: so much brokenness and no way to fix it.

But that is where the clumsiness lay – some of the people tried to fix it, to make it less sore.

“You’re young and can have more children. God gave you this because you can cope with it. She was an old soul and was just here for a while until her job here was done etc. etc.”

These may be common responses, but Joe’s right, they are superficial and meaningless. Try them on for size the next time your life breaks, and let us all know how that works out for you!

The bottom line is that if we are going to become skillful at being human we need to develop more than degrees and careers, and acquire more than money, cars and houses.

If we are to become human we will need to learn how to sit with pain without trying to fix it, or go around it, or smooth it over. And that will be difficult, sometimes impossibly difficult, but it will refine us, and define us, and give us lives of courage and integrity. It will give us gravity and significance as human beings.

As Alan Paton said, “All who are mature, whether young or old, accept suffering as inseparable from life. I cannot even conceive that life could have any meaning without suffering. There would certainly be no music, no theatre, no literature, no art.”

If you want to give somebody a lighter spirit when they are in pain, you will need to have the courage to sit with them when there is nothing to say, and say nothing. To get that right you will need to first enter the place of your own brokenness and sit there too.

“When the heart
Is cracked or broken
Do not clutch it
Let the wound lie open
Let the wind
From the good old sea blow in
To bathe the wound with salt
And let it sting.
Let a stray dog lick it
Let a bird lean in the hole and sing
A simple song like a tiny bell
And let it ring.” – Michael Leunig